Posted on 7th November 2016 by Graham 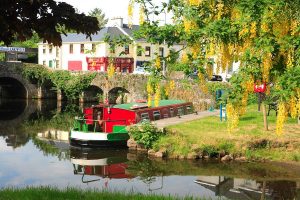 The Minister for Arts, Heritage, Regional, Rural and Gaeltacht Affairs, Heather Humphreys TD, today (Friday) announced that 172 towns and villages across the country are set to benefit from €10 million in funding under the 2016 Town and Village Renewal Scheme, which she launched in August.

The delivery of an enhanced Town and Village Scheme in time for Budget 2017 was a commitment in the Programme for A Partnership Government. Under Budget 2017, Minister Humphreys also announced that she has secured increased funding for the scheme for 2017, when €12 million will be made available to towns and villages across the country.

Funding awarded to each individual town and village under the 2016 scheme ranges from €17,000 to €100,000. The funding is being used for a wide variety of projects, identified by Local Authorities in conjunction with local community groups and businesses, including improving playgrounds and footpaths, tourism amenities, public art pieces and a wide range of works to improve the streetscape and public realm of towns and villages nationwide, to help make them more attractive and more sustainable places in which to live and work.

“This scheme is an important part of my Department’s work to rejuvenate and revitalise rural Ireland. I have more than doubled the funding for the scheme in 2016, and additional money will be available again in 2017, which should have a significant impact on towns and villages across the country.

“Rural development is of course a key priority for this Government. Our towns and villages are the heart of our rural communities, but many of them are still recovering from the economic downturn. The Town and Village Renewal Scheme is designed to help breath life back into our rural towns and villages.

“By improving the appearance and public amenities in our town and village centres, we can help to make them more attractive places in which to work, to live and to visit. I have taken a very collaborative approach to this scheme; each Local Authority worked with local businesses and local communities to identify projects which could have a positive impact on their towns and villages.

“We placed a particular focus on supporting smaller towns, with populations of less than 5,000.  A smaller number of projects are also being supported in each county for towns with a population of up to 10,000.

“This scheme is of course just one piece of the jigsaw in terms of our response to rural Ireland. My Department is also rolling out a range of other initiatives, including the REDZ scheme, the recently reopened CLÁR scheme and the Rural Recreation Scheme. In addition, work on the Action Plan for Rural Development is progressing well. It will be the first cross-Government plan, with targeted actions to specifically benefit rural communities.

“I would like to thank Local Authorities for working with me under a tight timeframe for this the Town and Village Renewal Scheme. I was determined to get this funding out to rural Ireland as quickly as possible. Now that the projects have been approved, work can get underway on improving these 172 towns and villages nationwide.”

The Town and Village Renewal scheme is part of the Government’s commitment to ensuring that the benefits of economic recovery are felt in every part of the country.  The scheme also addresses one of the recommendations in the CEDRA report, which was published in 2014.

Total funding of €10 million in Capital funding is being provided by the Government in 2016 for the scheme.   An allocation of €380,000 will be available in each of the 26 counties for Town and Village renewal projects.

There are two categories of eligible Towns/Villages:

Funding is being allocated to Local Authorities to meet up to 85% of the total cost of each project.

Please see below full breakdown of funding per town and village: