An inquisitive badger has ‘sett’ hearts racing in Cavan after it uncovered human remains in Cavan Burren Park near Blacklion. 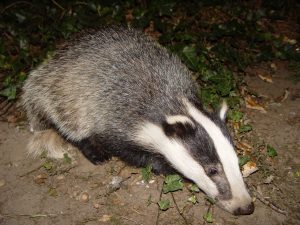 The approximately 4,500-year-old remains, which were unearthed near one of the many ancient burial sites located at Cavan Burren, were uncovered by local historian Séamus Ó hUltacháin and a team of archaeologists in 2014.

While on a tour of the prehistoric park, the archaeologists, Sam Moore (IT Sligo), Vicki Cummings (University of Central Lancaster) and Colin Richards (University of Manchester), spotted a ‘fresh dig’ by a badger in the vicinity of the tomb and noted 14 small pieces of cremated human bone and charcoal flecks in the spoil.

Removing archaeological material is prohibited by law, but as it was under threat of disappearing the bones were rescued and the National Museum was immediately informed. Following analysis one of the larger bones (part of a femur) was then sent to Queen’s University Belfast for carbon dating, and has now been discovered to date to circa 2438-2200 BC, during the Late Neolithic, Early Bronze Age period. This suggests the monument was in use during this period, but may have been built before then.

To put this find in context, the Pyramids at Giza are widely believed to date from between 2589 and 2504 BC, meaning that the badger’s Burren burrowing has really unearthed a piece of prehistory!

Gráinne O’Connor of Cavan County Council, which manages the park with Coillte, hailed the discovery as hugely exciting. “This has proved what we’ve always known; that people have lived and buried their dead at Cavan Burren Park for a very long time”.

Located just outside Blacklion in scenic West Cavan, Cavan Burren Park is regarded as one of the finest integrated prehistoric landscapes In Ireland.

The park is home to a number of remarkable ancient tombs and dwelling sites such as ‘The Calf House’, ‘The Giant’s Grave’ and ‘The Druids’ Altar’.

Forming part of the cross-border Marble Arch Caves UNESCO Global Geopark, which straddles Cavan and Fermanagh, Cavan Burren Park was the beneficiary of €1.3 million in EU funding in 2014, which saw the construction of an interpretive visitor centre and the development of multi-access trails.