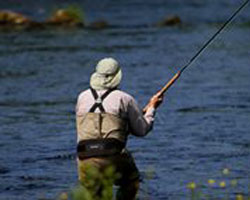 Many people choose Ireland above all others locations in Europe to fish. The amount of fish is plentiful, partly due to Ireland's climate and low pollution levels, and laws that outlaw illegal fishing. Ireland also has a plentiful supply of the much sought after and prized Atlantic Salmon, thanks to its geographical placement on the edge of western Europe. Salmon and sea trout are native species with an honoured place in Irish culture. And Ireland's lakes and rivers have preserved their character in a landscape that has changed very little over the centuries.

Ireland is also known as one of the most scenic countries in the world with Lough Derg and The Shannon river being two of the more famous waterways. Put it all together and Ireland really is one of the top fishing holiday destinations worldwide.

There are 28 lakes within a 5 mile radius of the town of Ballinamore, and 11 miles of the Woodford River. All these waters can be fished from the bank or from fishing stands. These waters are continually monitored for their fishing quality by the local Angling Association. Fishing is free all year around and maps of all local waters are provided. Fishing in Ballinamore is varied - from the Tench and Rudd fishing of lakes Willowfield, Corgor, Bolganard, Drumlonan and Corduff to the Bream and Roach fishing of lakes Gardice, Drumcoura, Keenheen, Drumlea, Scur, Templeport and Lakefield. These are just to name a few of the fishing and angling destinations closeby.

If you would like some more information regarding fishing or angling in Ballinamore or Co. Leitrim, please contact us

Some useful angling tips for fishing in Ireland

Weather Forecasts are broadcast daily on RTE Radio and Television. Check programme guides in the daily newspapers for times. They are also available on Aertel. Telephone weather forecasts are available from the Irish Meteorological Service - Met Éireann.

If bringing your own bait, anglers must take care that it is not packed in soil or vegetable material, the importation of which is prohibited by Law. Maggots are best packed in sawdust and worms in damp shredded newspaper. There is however, no need to bring your own bait as maggots, worms and groundbait are available from a network of stockists at all the popular angling centres throughout the country. It is always very advisable to order in advance. Please contact us with your orders.( Skippers Choice Baits) is our own brand of quality baits available all over Ireland. A summer cyprinid that offers great sport to those fishing light tackle in streamy water. Maggots, bread flake and worms are all effective baits, as are the fly and tiny spinning artificials. In Ireland the fish is present in the Munster (or Cork) Blackwater river and in Doon Lake in the East Clare Lakelands. Dace live in shoals and move around in or near the surface in well-oxygenated water, generally where there is a sandy or gravel bottom. They'll be in channels near the weedbeds and in quieter water off the main current during floods, but mostly you'll find the larger ones in deep holes near weits. In autumn's colder water they tend to move into deeper quieter places. They spawn from April into May.

Perch are plentiful in Irish waters but really big ones are a rarity. They are found almost everywhere, including game fisheries, and will respond to a legion of angling baits. They spawn from mid-April into mid-May. Artificial spinning baits account foremost perch, especially during warm water conditions. Dead baiting with minnows scores consistently throughout the season. As we approach the end of our first year of training on this counselling & psychotherapy course, I reflect back over the year with a sense of achievement.

The Pike (Esox lucius) is our largest predatory freshwater fish and is widely distributed in lakes, rivers, canals and ponds all over Ireland. There are countless stories and legends about mammoth Irish Pike and in many authoritative texts on Pike and Pike angling, Ireland is given pride of place. Large Pike are present in the majority of our branded coarse fisheries, particularly the large River Shannon lakes and on many of our major rivers. Pike over 20lbs (9 kilos) are regularly taken and fish of 30lbs + (13 kilos) are recorded every year from lakes as small as 20 acres (8 hectares). The abundance of excellent stocks of fodder fish (bream, roach and hybrids) ensures that Irish pike generally grow faster and mature earlier than in other EU countries. This guarantees better all round sport for the pike angler throughout the year. A copy of the Irish Specimen Fish Committee`s Annual Report provides the angler with valuable information on the locations of all big Pike captures in the previous season and the successful baits. Pike spawn from February to April in shallow flood margins on lakes and rivers and many of our biggest Pike are captured just prior to the spawning period. Young Pike feed mainly on aquatic insects but turn to an almost exclusive fish diet after the first year. A mature Pike will eat about five times its own weight of fodder fish in a year. Various angling methods are successful for Irish Pike. On rivers like the Shannon, Suck and Barrow, many big Pike live in quieter areas usually on the fringe of a shoal of Bream or Roach. Often coarse anglers fishing on a shoal of such fish can provide a vital clue to the location and capture of bigger fish. Pike anglers are well advised to walk softly along the margins and drop dead baits beside the near bank or cast the bait or spinner over to the other side of the river. Big Pike do not like to lie in open water, so over hanging trees and back eddies are often key locations. Many Irish anglers like to spin or wobble dead baits, walking miles of river bank in a day covering acres of water. In the winter months, however, if shoals of fodder fish are located, an angler using a float or ledgered dead bait in a static fashion can find success for bigger pike. Small lakes can usually be fished profitably from the shore but on many of the bigger lakes, a boat is often required and these can be hired at most of the major angling centres. Trolling large spoons, spinners, plugs and dead baits are favourite methods. In recent years on the very large lakes, e.g., Derravaragh, Ree, Derg, Allen, etc., some anglers have employed the aid of modern echo sounding equipment to locate the vast shoals of Bream or Roach. Baits are then fished at the edge of these shoals to catch big Pike. The majority of tackle shops around the country stock a wide range of dead baits, e.g., Herring, Mackerel, Smelt, etc., and information on nearby waters and boat hire is available from this site or any tourist office. There is a network of Pike angling clubs all around the country. They can provide helpful information and also regularly run competitions on many waters.

All Pike should be returned alive to the water and should be handled carefully. It is important to use strong trace wire in excess of 25 lbs. (11.3 kgs) and reel line over 12 lbs. (5.4 kgs) and that the use of small strong hooks be employed in tackle. If freelining or ledgering dead baits, it is important that tackle is not left unattended and at the first sign of a fish taking a bait, the angler must strike instantly to ensure that the pike does not swallow the bait into the stomach.

Legislation to be noted:

In the interest of conserving pike stocks and maintaining product quality, the following laws have been introduced:

The above mentioned prohibitions do not apply to specimen pike (as defined in the bye-law) provided only one such pike is taken and killed by any person on any one day and that only one such pike, in whole and ungutted form, is in the possession of any person.